What Are Some Of The World's Weirdest Aphrodisiacs?

Susan Hayes answered
Since Adam first bumped into Eve in that long ago garden, men and women have been on a quest to make the act of love happen bigger, better and more often.  If we think it might help, we’ll grind up, boil down or dry out anything and consume it with a quick prayer that it becomes a lust inducing potion. 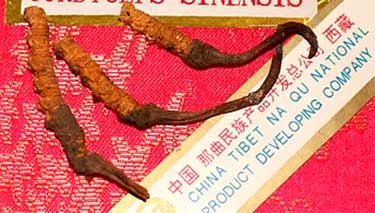 This ancient aphrodisiac comes from Tibet, where the Ghost Moth and the parasitic fungus Yartsa Gunbu that have developed a horrifying symbiotic relationship that one can only hope is not the model for romance anywhere.  The fungus attacks and kills the moth in its caterpillar stage by infecting it and then slowly filling its entire body with its nutrient gathering threads.  To add insult to injury, the fungus then sprouts a fruiting body out of the caterpillar’s forehead in order to reproduce.  This inter-species bonding is held over into their afterlife, as both the caterpillar corpse and its fungal growth are used to create the aphrodisiac. 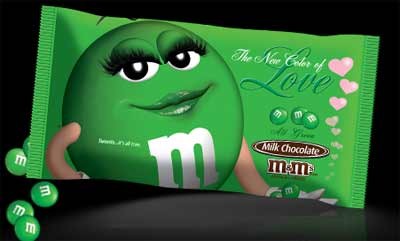 The candy that melts in your mouth, but not in your hands is also the candy that can make your dream date melt in your arms, but only the green ones.

Why are only the green ones magical boosters of love? No one knows. Green M&M’s have been touted as an aphrodisiac since some time in the 1970’s, when students were noticed to be picking out the green ones to give to their special someone. 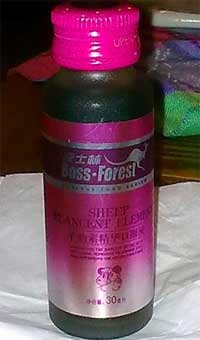 Also known as the afterbirth, this gooey baby byproduct is considered to be a powerful aphrodisiac in some cultures.

Usually dried and powered to make it more palatable, this ancient cure all can be consumed in tea, drunk as an elixir or popped in convenient pill form.  After all, what could be better for helping improve the baby making process then the leftovers of birth itself? 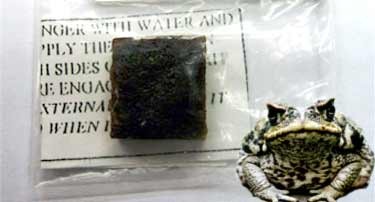 Another high risk aphrodisiac that has killed those foolish or desperate enough to try it, Love Stone or Black Stone originated in the West Indies and is made from dried toad venom. Fatal if ingested, this highly toxic compound is thought to ensure a heart stopping performance for any man; unfortunately it often just stops the man’s heart. 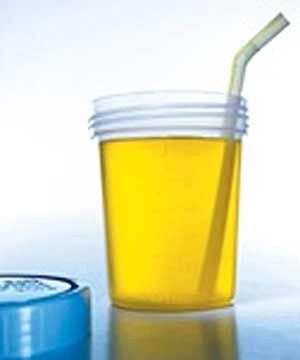 In Zimbabwe aphrodisiacs are made of baboon urine mixed with beer. In India cow urine is considered a powerful enhancement when drunk straight. No matter how you mix it, urine is touted as a sexual stimulant and general curative around the world.  Sometimes the urine is collected from those who have taken herbs or natural hallucinogens, and there is still some of this drug within the urine and affects whoever drinks it.  Talk about recycling! 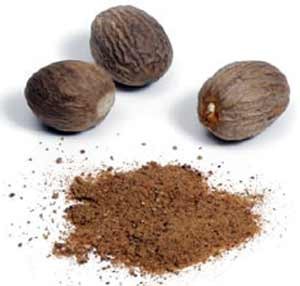 A dash of this delicious spice is called for in countless recipes, and if you are looking to spice up your love life, it is supposed to be a wonderful way to boost the mood and apparently increase stamina.  What isn’t mentioned is that in dosages large enough to cause a euphoric boost, it can also induce mood shattering hallucinations and other psychedelic dangers, including the so very unsexy option of dropping dead. 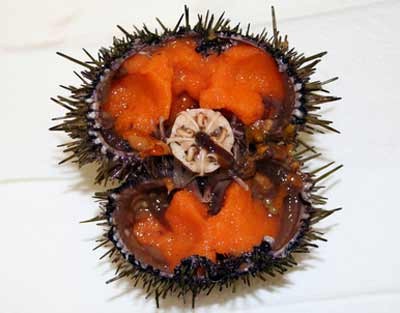 The ovaries of a sea urchin are a favourite Japanese food and noted aphrodisiac, eaten raw and sometimes with a squeeze of lemon. These squishy bits of urchin organ are thought to increase stamina and energy. 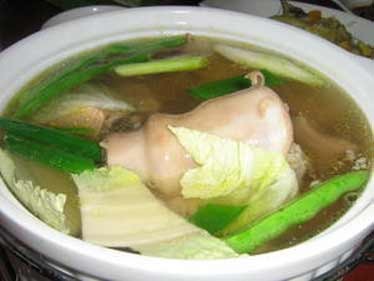 If you are feeling the need for romance and find yourself in the Philippines, there are a number of choices available, but one of the most popular is known simply as Soup Number 5 or Bat and Ball soup.  The testes and penis of a bull are boiled together, sliced and made into a soup of beef stock, ginger and onions.  If your mate can cope with your breath after you eat this, there’s certainly hope in the romance department! 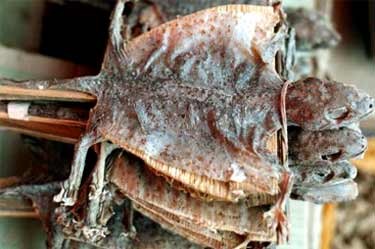 There are a number of cultures that believe that consuming the dried skin of a lizard can put more pep in your step. The Toad Headed lizard is one of the lucky species whose outsides are supposed to be good for our insides.  The carcass is steamed, pressed flat and then sun dried into something that looks like a Frisbee with a face and tail.  If you are going to go buying reptile skin to improve your love life, I would suggest a nice alligator handbag or wallet; either would make a romantic gift with the added bonus of not causing indigestion. 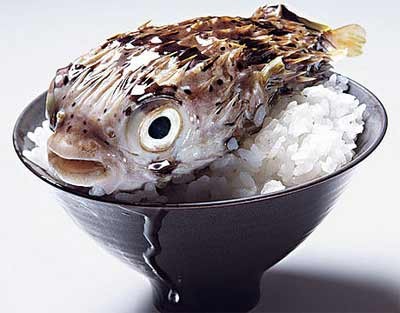 Most people have heard of Fugu, the dubious delicacy that is the raw meat of the puffer fish, prepared very carefully to ensure that the customer doesn’t ingest too much of its natural toxins and expire before they pay their bill.

Wild fugu contains Tetrodotoxin in its little fishy organs, and if trace amounts of this compound are consumed it causes a distinct tingling in the body, particularly in the extremities. It is this sensation that has made Fugu a purported aphrodisiac, despite the fact that if the chef is having a bad day, there’s a good chance you won’t live long enough to enjoy those tingles. 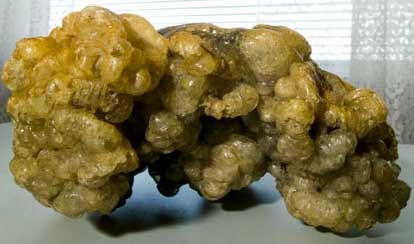 Sperm whales are neither romantic nor known for their radical sex lives, and yet there was a time that this waxy hunk of whale bile was considered to be the ultimate in sexual jump starts. Created in the whale’s digestion system, Ambergris is usually either passed through or vomited up by sperm whales and left floating in the oceans to cure into its usable form. If it didn’t’ work for the whale, I'm not sure why we thought it would work for us. Then again, its still used in perfume making, so perhaps there’s something to this after all. 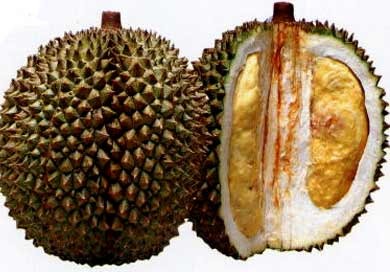 There are many foods considered to be aphrodisiacs, chocolate being number one on most people’s lists. This next one though is not for the squeamish, for there is no part of it that doesn’t defy every convention of what is sweet and romantic.

The durian fruit is so pungent that it has been banned from hotels and buses southeast Asia where it grows. Its odour has been described as being akin “…to pig manure, turpentine and onions garnished with a gym sock.” While eating one has been colourfully described “like eating sweet raspberry blancmange in the lavatory.”  If you can manage to get your intended to try this fruit, at least you’ll know they have a sense of adventure. 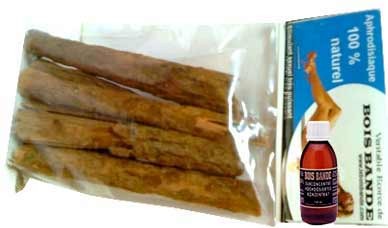 Need a touch of fiber to go with that spice in your love life?  Then Bois Bande is for you.
Made from the bark of the Richeria grandis tree in the Windward isles of the Caribbean, This potent potion it is believed to cause priapism, a often painful state of male arousal.  The bark is usually tossed into wine or over-proof rum with other herbs and allowed to mellow for several weeks before being consumed. If the bark doesn’t work, then I'm sure the rum will help all on its own. 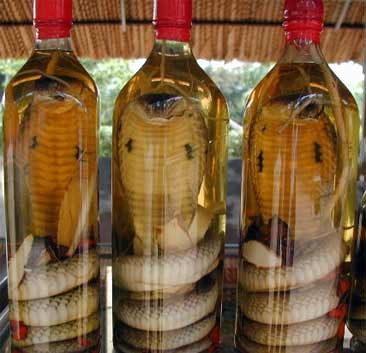 Cobra blood is an ancient aphrodisiac, usually mixed with a strong liquor and drunk. Fresh is best, but for those not willing to risk getting bitten in the pursuit of l'amour, there are alcoholic drinks that contain whole or portions of the cobra within the bottle. So if you are looking for help for your trouser snake, you can consider getting soused on serpent bits.